True distance 75 Nm, final log reading 84.5 Nm. Departed Salcombe 1440, arrived St Peter Port 0530. Av O.G 5.14 knots. Av O.W 5.9 knots. Weather W/Sw 4/5 occ 6, shwrs. Sea state mod. Actual wind speeds were higher and sea state mod/rough. During the night we had log readings of 8.0 knots over the water and gusts of 28 knots. Destiny was on a beam reach and surfing down the waves like a dinghy, but very stable and safe, however, it was probably a good job that the female crew couldn’t see the sea around them! Went into Victoria marina for a deserved rest. £25 + £2 electricity. Wind and sea state were higher than forecast, and on reflection the passage was unfair to the two female members who were unable to get below to take some rest, and in hindsight we should have diverted to Dartmouth and crossed the next day. We also left far too early so were up against a strong tide in the Little Russel which slowed us at times in the last two hours down to only 2.0 knots O.W. Had we got that tide right it would have been a very fast crossing! 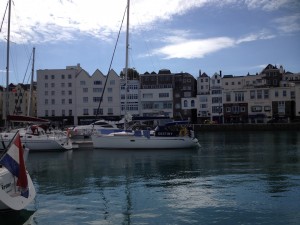 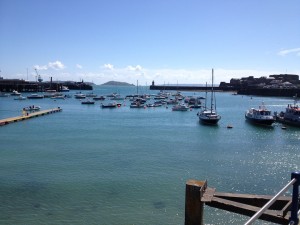